Due to the current global health situation with COVID-19, we’d suggest not travelling right now. Furthermore, many cities and attractions will not be operating as advertised on our website. Please stay up to date using official sources like the WHO. Stay home and stay safe!
Links in this article may earn us a little money if you book/ order stuff. More here.
Last Updated on February 23, 2020

Begin to Learn Some German Phrases for Your Upcoming Trip!

If you’re heading to Germany, Austria, or parts of Switzerland (or any new country, for that matter) it’s best to learn a few phrases in the language spoken. Learning to speak a few words can help you be polite and respectful in a new place, while also allowing you to get the most out of your experience. Learning German is no different.

Travelling to Germany for the first time can be exciting. Admittedly, it can also be a little daunting! So, we’ve put together a guide on 11 things you should know before travelling to Germany. Hopefully, it’s helpful and you get to discover more beautiful places in Germany on your trip! We write quite a bit about Germany (given half of P&P is German) so check out our other German posts for travel inspiration:

Let’s get back to language. If you’re planning to stick to big cities there’s a good chance you’ll be just fine speaking in English. People in tourism and the service industries will also be able to speak English.

That said, if you are in smaller cities and/or speak to older people they might not know enough English to have a full on conversation. However, often they’ll understand more than they are able to speak! So whether you’re looking to chat up a storm or just want to be polite to those you meet, here are a few German words and phrases that you will need/will use if you’re travelling to Germany!

Things to Know About Learning the German Language

Before we start, there are a couple things we should say about learning the German language. Eric has been learning German since he and Lisa started dating and it’s been a slow but rewarding process. He’s improved a great deal to the point where we can piece together simple sentences and respond according to lots of different situations.

The biggest barrier to learning fully is using it daily and committing time each day. Learning a new language takes time and commitment. However, all of Lisa’s family speaks German and not much English so it’s kinda on Eric to learn German so they can communicate effectively!

Eric is using a few tools that make it easy to learn and stay on track. He started using the Duolingo app for simple words and uses Babbel currently to do lessons. One of the books he’s using is the Assimil German Paperback. We bought it in Hamburg and it’s great for understanding conversations in context through little dialogues – while also including explanations as to why things are the way they are (eg. verb tenses, the reason a word is spelled differently than before, etc).

He also has the Berlitz German Phrase Book which is super tiny and really good as both a phrase book and a dictionary for vocabulary and a few verbs. Pretty handy!

Unlike in English, in German there is an informal (du) and a polite form (Sie) when you are addressing people. As a foreigner that clearly doesn’t know the language well and is just trying some phrases you probably won’t have to worry about it too much. Generally, people will just be happy that you are trying to speak to them in their native language.

For a little more context, however: you would address anyone older than you that you do not know well with “Sie”, while you would address people that are your age with “du”. This is especially true for the younger generations who seem to be using “Sie” less. An exception would be in any formal situation: e.g. you’re eating at a restaurant, talking to a police officer, etc.

Letters of the German Language

Pronouncing German words is actually not as difficult as people sometimes make it out to be. Of course, there are some complicated words, but in general you’ll be just fine. The German alphabet has four additional letters compared to the English alphabet. They are ß (sometimes also written as ‘ss’), ä, ö and ü. Eric likes to call ß “crazy B” even though it has nothing to do with the English letter B.

If you’re just looking to just learn a few of the standard basic German words or phrases, here is a short list of what you’ll need to know:

Since in German “Bitte” can be “please” as well as “you’re welcome”, the concept of having two separate expressions can be foreign to German speakers. Take Lisa’s mom for example – in the beginning when she wanted to say “you’re welcome” in English to Eric’s “Thank you” and would often say “please”. We’ve since had a good laugh and it’s been corrected!

Introducing Yourself in German

In Germany, you usually don’t have to wait to be seated – especially not in a cafe. An exception might be a fancy restaurant or if you made a reservation prior to showing up since they will have a table ready for you. If you would like to see the menu, you can say:

If you want to order a coffee, you could say:

Of course, you can also substitute this word “Kaffee” with others, e.g. einen Cappuccino, einen Orangensaft (orange juice), ein Glas Wasser (a glass of water), ein Bier (a beer).

You should note that the word “einen” could change as well if you use another word instead of coffee – that is because Germany uses masculine, feminine and neutral nouns so we can’t just use “a coffee, a beer etc.” for every word. As a visitor that doesn’t speak German you shouldn’t worry about it – everyone will still know what you mean even if the “a-part” in front of the noun is not the correct form.

Before you start eating, you would say:

If you want to order a second beverage, you could say:

When you’re done and ready to pay, say:

When you are in Germany you might have to use some numbers. Ffor example, if you want to order for groups (e.g. more than one beer) or when getting ice cream and you want more than just one scoop. Of course, there are many other occasions when knowing basic numbers might come in handy.

When you walk through German cities you’ll come across lots of German phrases on buildings or signs. These are some of the most common ones and knowing their meaning can be very helpful.

And there you have it – some of the most important words and phrases you’ll need for your trip to German-speaking countries! In short, try your best and you’ll be just fine. Often, it’s the effort that counts. If there’s anything you need or want to learn, feel free to get in touch! We’re happy to answer any real-life German language questions you might have! And if you’re learning right now, stick with it like Eric and you’ll get there!As always, fröhliches Watscheln!
-L&E
Booking Your Trip Soon? This Is How We Do It: 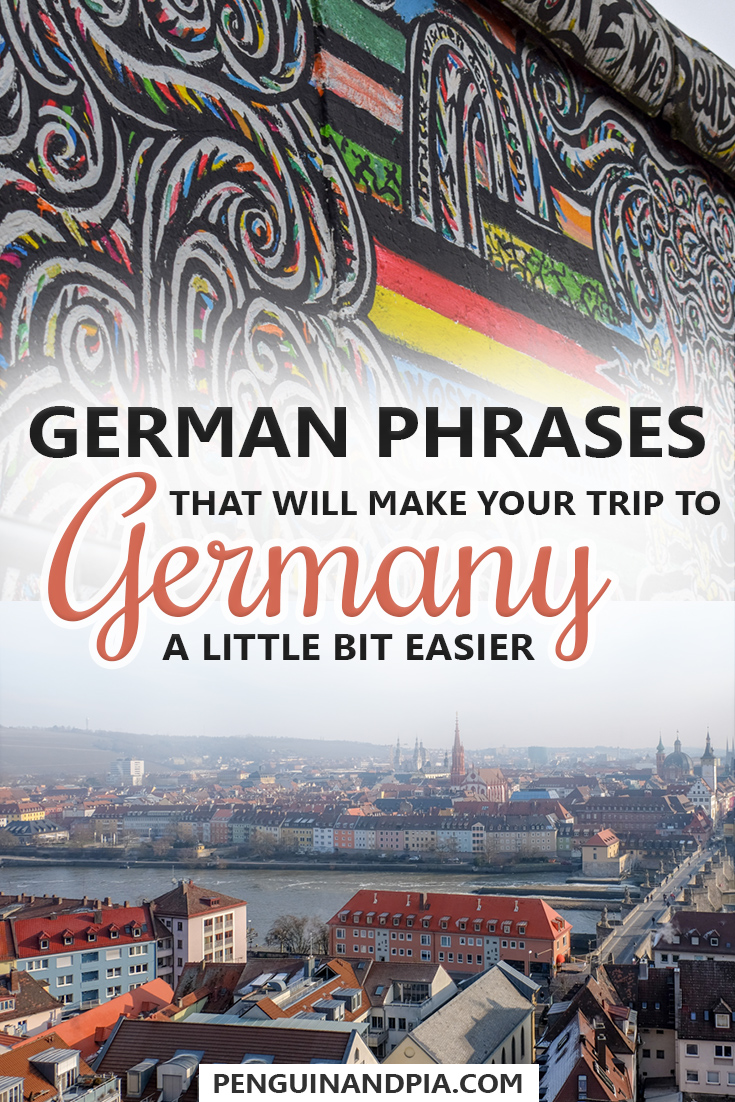 Lisa is a German content writer and marketer who studied Business and Languages/Cultures at university. She spent a year in the United States during high school, went to university in Copenhagen, Denmark, did an internship in Edinburgh, Scotland and studied abroad in Bilbao, Spain. Next to travelling around over 20 countries in Europe, she has also lived in Toronto, Canada on a Working Holiday Visa.