Due to the current global health situation with COVID-19, we’d suggest not travelling right now. Furthermore, many cities and attractions will not be operating as advertised on our website. Please stay up to date using official sources like the WHO. Stay home and stay safe!
Links in this article may earn us a little money if you book/ order stuff. More here.
Last Updated on November 26, 2018

Here are 23 Travel Photos You’ll Shake Your Head At!

Let’s face it – we love travel photos. The process of creating something is always a thrill and we love having personal souvenirs to look back on from all of our experiences. The photos we create and the memories we have are ours forever. As long as they are important and special to us, that is all that matters.

So, being the lovable penguins that we are, here are 23 not-so-perfect travel photos from our adventures. We’ll tell you a little story with each one. Ready to make us feel silly?

The “Eyes Closed in Warsaw” Shot 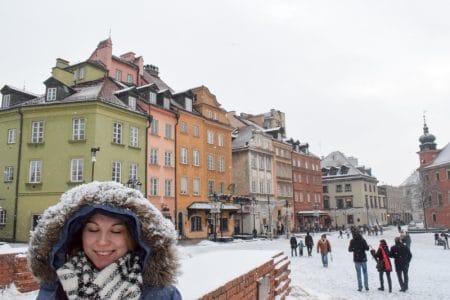 Let’s start off with a classic. For whatever reason, Lisa has an incredible ability to NEVER HAVE HER EYES OPEN when Eric snaps a photo of her. Case and Point: We were wandering in the Old Town of Warsaw, Poland and apparently it was just so beautiful that Lisa couldn’t keep her eyes open.

The “My Face Is Apparently Melting” Shot 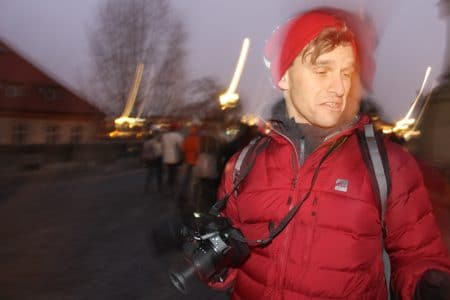 Ah, yes. The beautiful Charles Bridge in Prague. After a night wander, we were heading back to our Airbnb. Lisa whipped around to snap a night photo – which she knows very little about. Needless to say, this shot isn’t Eric at his best!

Read Next – Finding the Best Things to do in Prague

The “Hold My Sunglasses, Oh Wait I Still Have Them” Shot 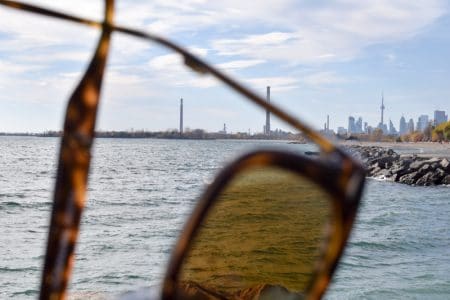 The Beaches is a great neighbourhood in the east end of Downtown Toronto. From the lake front you can see for ages and snap stunning shots of the CN Tower. Unfortunately, the view was obstructed by a foreign object in the other hand. Thanks, Rayban.

The “Stuff in the Way Or Stuff On The Lens” Shot: Part 1 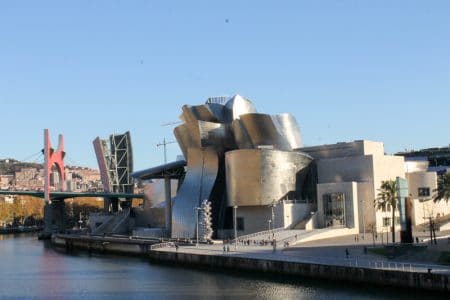 Good Riddance to Lisa’s old Canon! Even though it was her trusty camera for quite some time, it had lots of dust and debris in the lens. Here’s a shot of the Guggenheim Museum in Bilbao, Spain – lens dots and all.

Read Next – 11 Beautiful Cities in Spain You Should Visit

The “Sweet-Toothed Monster in Prague” Shot 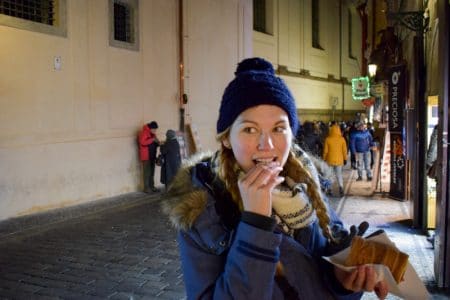 Lots of people have tried “Trdelník” in Prague, Czech Republic. You know – it’s that flame-grilled rolled dough on a stick that’s covered in sugar and other fillings? Here’s Lisa enjoying hers! 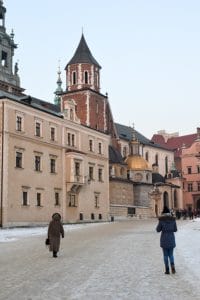 We were so cold snapping photos of the beautiful Wawel Castle in Krakow, Poland. Lisa walked ahead so Eric could snap a nice photo of her wandering. Apparently, this elderly woman also received Eric’s cue to walk into the shot.

The “Everything’s Crooked in Krakow” Shot 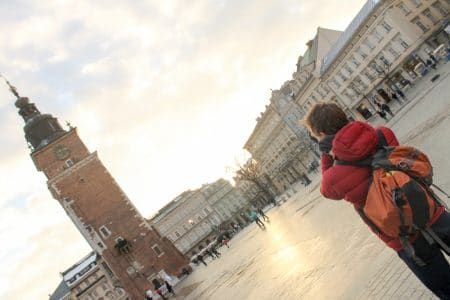 Lisa has a confession: she’s not always super with making a photo straight horizontally. This, however, is next level crookedness. Her excuse? “It’s sometimes difficult to fit everything into the photo!” Well, you did it. 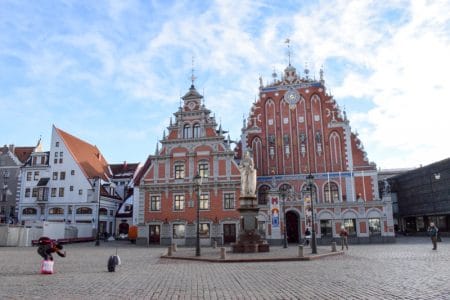 This photo actually brings up negative energy for Eric. Not because the guy is taking a photo of his bag in the middle of the open square in Riga, Latvia – but because Eric waited for a good 4 minutes for this guy to be done taking the damn photo. I’m all for photos but… why?!

The “Stuff in the Way Or Stuff On The Lens” Shot: Part 2. 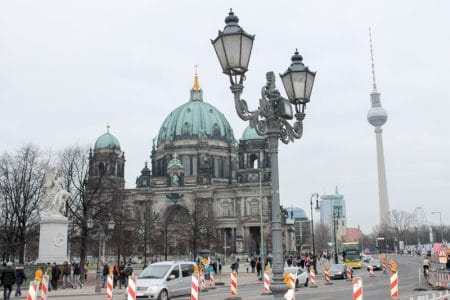 The Berlin TV Tower and Berlin Cathedral draw so many visitors to the German capital. Remember though: if you’re not close enough to them, you’re going to capture a lot more stuff (read: construction road cones things) in the photo!

The “Perfect Sunset Shared With Basically Everyone” Shot 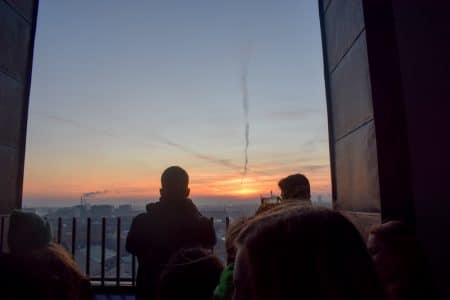 The tower of Christiansborg Palace in Copenhagen, Denmark is one of our favourite photo spots in the entire world. However, if you’re heading up there to catch the sunset you certainly won’t be alone! While we managed to get the shot we wanted, we also got a chance to actually enjoy the view and the setting. This one is more to show you that there’s often a different reality than what’s posted!

Read On – Our Top 19 Copenhagen Attractions 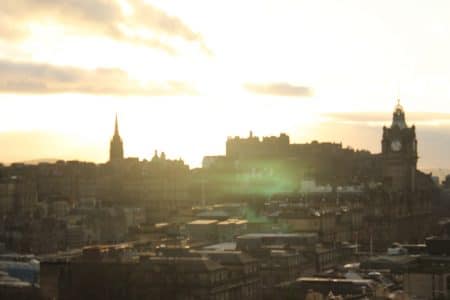 The “Are My Lines Straight?” Shot 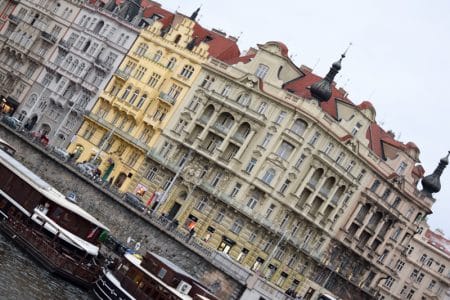 Okay, Lisa isn’t the only one who has the odd crooked snap. Prague is known for its clean lines and beautiful architecture. Eric did his absolute worst to capture any of it.

The “Distressed For No Real Reason” Shot 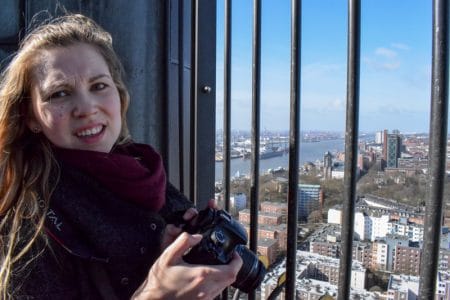 We often catch one another with odd faces in between smiles and chatting. From the top of St. Michaelis Church in Hamburg, Germany, Eric got Lisa looking perfectly comfortable with her surroundings. 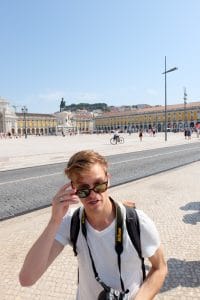 We made a stop over in Lisbon, Portugal on the way home to Canada. While we had a great wander in the extremely hot weather, it was our sunglasses that kept giving us problems. Want to take a photo? Gotta remove those glasses. Done taking the photo? Toss them back on your face. It apparently became too much for Eric, and Lisa was there to capture it!

Read More About Lisbon – How to Spend 6 Hours in Lisbon 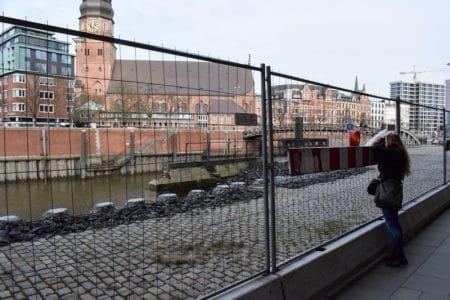 We took so many beautiful shots in downtown Hamburg, Germany. What you don’t see on social media is the fact that there was a lot of construction while we visited. At this point, we’re used to shooting photos through fences. 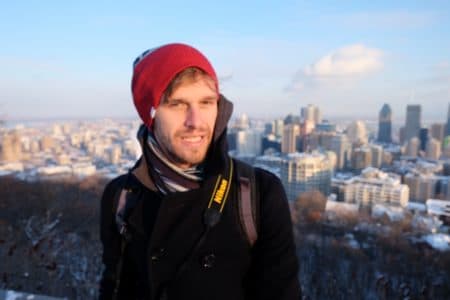 Let’s thank Lisa for this great shot of Eric at the top of Mount Royal, in Montreal, Canada. Now, if only we could just make the photo a tad sharper…

The “Stuff in the Way Or Stuff On The Lens” Shot: Part 3 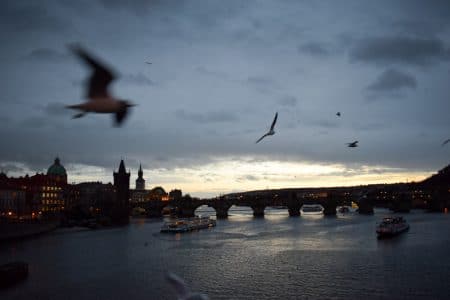 Once again, the Charles Bridge at night time strikes again. This time, it’s the pesky seagulls that made the shot memorable. They were everywhere and for some reason they all came alive to swarm the bridge at the same time.

The “Attack of the Hair” Shot 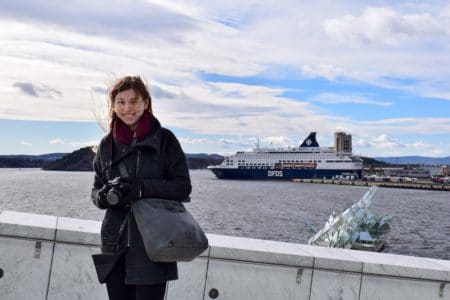 If it’s windy out, Lisa’s hair can often slow down the process of taking photos. We were in Oslo, Norway climbing towards the top of the Opera House when we stopped to shoot a few with the cruise ship in the background. Unfortunately, the wind and Lisa’s hair had other plans.

The “Let’s Look Directly Into The Sun” Shot 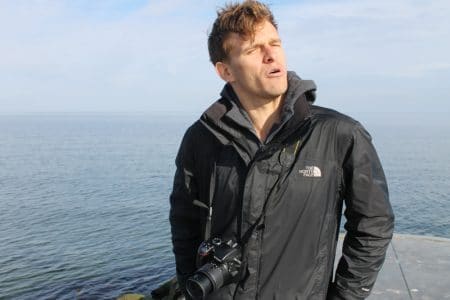 One afternoon, we hopped on the S-train and headed north of downtown Copenhagen to the beach in Klampenborg. While there, we had a small picnic and snapped a few photos as it was getting warmer in March. Eric got so excited by the sunshine he just couldn’t help looking up. Ouch.

The “Tell Me Where To Stand” Shot 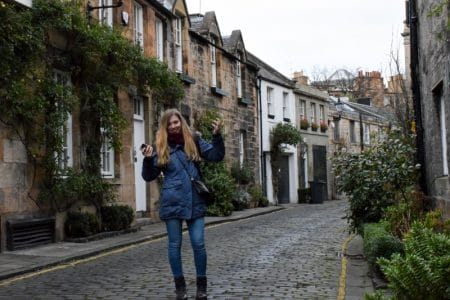 Occasionally, we want to take a photo together. We bought a tripod in Hamburg but we don’t use it that often. Unfortunately, this photo was taken a few months before that trip to Hamburg. So, here we are on Circus Lane in Edinburgh – with Nicky the Nikon sitting on a garbage can. Lisa was the distance checker for the first few images. After a while, she had had enough! 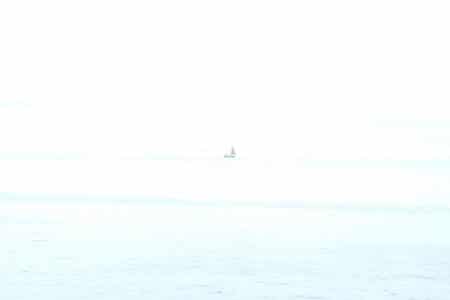 Can you even see it? Neither can we! Lisa always laughs at this photo from Brighton, United Kingdom. She knows fully-well that she had no business taking a photo of the little sailboat that was REALLY far away. She doesn’t even have a decent zoom lens. To make matters worse, she forgot to adjust for exposure. This perfect photograph is the result. Splendid. 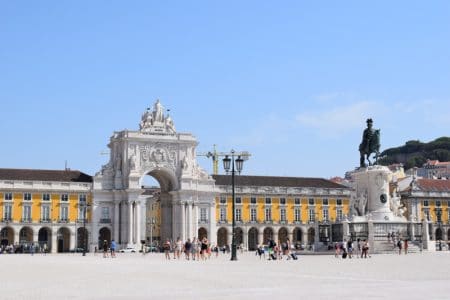 Cranes are the absolute worst “hide ‘n’ go seek” players. Ever. This would have been the perfect shot from Lisbon, Portugal. Guess it means we’ll just have to return soon! 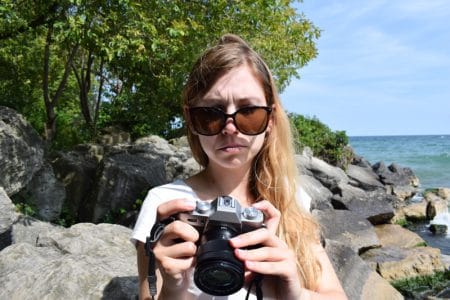 Down by Lake Ontario in Toronto, Canada, Lisa was taking a moment to adjust the settings on her new camera. Her sunglasses legitimately started out on her head – but they dropped down in front of her eyes… and Eric snapped this.

And there you have it – 23 of our best (worst) travel photos! What do you think? Do you see Penguin and Pia in a whole new light? Good! We’re happy to share our travels, good and bad, with you. Do you have any hilarious photos from your travels that you look at again and again and still laugh? We want to see them! Tag us on social media or comment below with a link to an article. We’d be happy to laugh with you!