Taking the Bus From Ulcinj to Tirana is Simple!

As if Ulcinj, Montenegro wasn’t odd enough – we then told people we were heading into Albania. The reaction was a mix of excitement, horror, curiosity, and confusion. In reality, we enjoyed both countries and the journeys between them! By the way, if you are thinking of exploring Ulcinj here’s our guide on top things to do, see, and where to eat in Ulcinj! We even made an Ulcinj travel video!

Taking the bus (or autobus) from the south of Montenegro into Albania isn’t too difficult of a process. However, there are a few details you should be aware of when you’re making the journey! We give you as much detail as we can about the bus stations, transferring buses in Shkodër, the prices, and other need-to-knows for the trip from Ulcinj to Albania!

Since we travelled around the Balkans for a few months, we got really good at taking the bus between the cities and towns in different countries. We wrote a guide about our experiences for each transition so have a look below if you’re planning a Balkan itinerary!

General Information on the Bus From Ulcinj to Tirana

We travelled in May and there were two buses to choose from throughout the day: one early in the morning (double check the schedule) and ours was around 12:00 noon. You can check the timetable on GetbyBus.com and BusTicket4.Me but it’s best to go to the bus station and check when you arrive since online information can be outdated.

To be honest, this whole journey was really simple. We got on the bus, crossed the border, changed in Shkodër, and arrived in Tirana. All we did was throw our bags in the back (you’ll read about that below) and enjoy the countryside. Here’s exactly how each leg of the trip went!

Getting Onto The Bus

In Ulcinj, you’ll head to the Ulcinj Bus Station or the Stacioni i Autobusave Ulqin. If you Google either of those you’ll get the location of the station. It’s a little far from the Old Town so if you are staying far away consider a taxi to get there. The official address on Google is Ulcinj 85360, Montenegro.

The station itself is pretty simple. There are a few seats outside, a bar/restaurant connected to it, and grocery stores very close by. There are taxis waiting to take you places just outside the bus station but as with most taxi stands that are potentially overpriced so just be cautious of what you are agreeing to pay before hopping in.

Inside, there was a ticket counter with staff who do generally speak English. We bought our tickets a few days in advance at the station and had no problems.

One important detail for Ulcinj Bus Station: they do not accept tickets from busticket4.me. Yes, this is a popular site for buying tickets online and printing them or showing them on mobile – this is standard for most of the Balkan countries. But Ulcinj is a town that, as a local, once said, “does things a little differently than everyone else”.  So, buy your tickets from the bus station directly.

On the day of, we arrived and waited for the bus to arrive. It pulled up, we crossed the ticket barrier (which is manned by a security ticket scanner guy) and got on the bus. As for our “checked” bags – our backpacks were tossed in the back of the small mini-bus free of charge.

This was different from literally everywhere else in the Balkans where we had to pay for the larger bags to go under the bus. We even had a small misunderstanding with the Bosnian driver in Split over our payment for checked bags.

After leaving Ulcinj, we drove for about 40 minutes before we reached the border with Albania. All the Balkan borders do things a little differently when it comes to procedures and stamps. For this one, the driver grabbed our passports and identification cards, got out, and went to the border control booth himself.

Funny side story: there was a French couple who got on in Ulcinj and they didn’t have their passports with them. We assumed they were just doing a day trip to Shkodër. Well, this is an international border that is NOT in the EU – so the driver just shook his head, and told them that they had to get off the bus.

There was just no way they could cross the border. They were FURIOUS – almost dumbfounded, but it was entirely their fault. They just had to wait for him to return which was in about 2 hours.

So, Penguin and Pia Tip: Have Your Passports Ready and On You When Crossing International Borders!

Anyways, the driver came back eventually, handed out the passports and ID cards again, and off we went. There was only one “booth” in the sense that we didn’t get a stamp to leave Montenegro and enter Albania, like weeks before crossing through other border checks.

There was no stamp at all! We thought this might have implications for later when we flew out of Albania but they didn’t care. We were sure that they had scanned the passports in the booth so they had an idea about when we entered.

We had heard, like you maybe, that driving in Albania would be a little crazy. Now, we don’t know what the roads are like in other parts of the country but we didn’t have the worst drive between the border and Shkodër, and then from Shkodër to Tirana. Yes, these are higher traffic routes with a move paved highway, but we were definitely expecting the worst.

In the city, the roads are paved. A little hectic, but somehow the traffic flows (even with bikes and people walking) efficiently. It’s chaotic, but not dangerous. We probably wouldn’t feel comfortable driving ourselves around – given that there are often horses, bikes, and tractors on the major roads as well, but the shuttle bus ride was just fine!

We drove for about 30 minutes until we reached Shkodër. As we drove into the city – and as our first time seeing a city in Albania – we honestly wanted to get out and stay there, too! We had heard good things and were sad we didn’t get to stay a night. We’ll be back, though!

We pulled up to the bus station which was basically lots of buses on the side of the main road. It was more of a “city stop” than a physical bus terminal. We honestly can’t find the address or the exact stop but if you Google “Bus Station to Tirana” there is a signpost with a schedule on the sidewalk. We THINK that was it. Either way, the buses usually leave from the city centre – which us around a giant roundabout. You can’t miss it on Google Maps.

For our experience, we pulled up to the sidewalk and the driver told the few people going to Tirana that “the shuttle behind us would take us”. Now, we didn’t actually know ahead of time that we were changing shuttle buses in Shkodër.

However, the next driver greeted us – the sign on his shuttle said “Tirana” and other people were getting in so we assumed it was normal. This shuttle was more of a van-style but it was quite comfy! We got in and off we went with nice Albanian driver #2.

The drive was about 2.5 hours – and it was beautiful. The countryside was really neat to see given everything that we had heard about Albania but never visited. Along the way, the mini-shuttle stopped to grab people.

It was sort of like a taxi/bus service. People jumped in, told the driver their destination, and paid the driver a few coins when he left. We went all the way to Tirana with another gentleman who had a Turkish passport and also seemed like a tourist.

One thing that happened was that we had to drive through what looked like a routine police random checkpoint set up on the highway. We got pulled over, and – while we don’t actually know what was said – we THINK the woman asked the driver to show his papers for the bus company as well as how long he had been driving for. She allowed him to continue driving but it was after quite a bit of discussion! In any case, it was fine – and we never felt unsafe.

As we drove along, we could see the traffic getting heavier and the shops and stalls start to become more frequent. We knew we were close! In Ulcinj, we were told by our hostel owner that we might just have to get off “wherever” in the centre of Tirana.

We had anticipated getting into the centre a bit more but we actually got dropped off at this bus station: Stacioni Autobusave Zona e Veriut. It’s located in the north-west end of the city centre. Here is the address on Google: Rruga Dritan Hoxha, Tiranë.

We have since found out that this is the stop for the bus to and from Shkodër so that makes sense! It was actually pouring rain by that point but the driver was patient and helped the few of us with our bags. In actual fact, this station was actually closer to our Airbnb so that was a win.

You have to understand that Tirana is a growing city that changes by the day. One week there might not have been a bus stop, the next there is a full-on station. Things move fast in that city and it’s incredible to see! You can read all about our time and places to visit in Tirana to plan your stay!

And there you have it – our journey from Ulcinj to Tirana. Overall, the journey was pretty enjoyable. It was also a great introduction to Albania. We had friendly drivers, got to see the countryside, hang out with other normal bus riding Albanians, and the transition was simple. If you want to know any information beforehand, don’t hesitate to ask in the Ulcinj Bus Station or your driver. Oh, and have fun in Albania. Help us spread the word how amazing of a country it is, will ya? 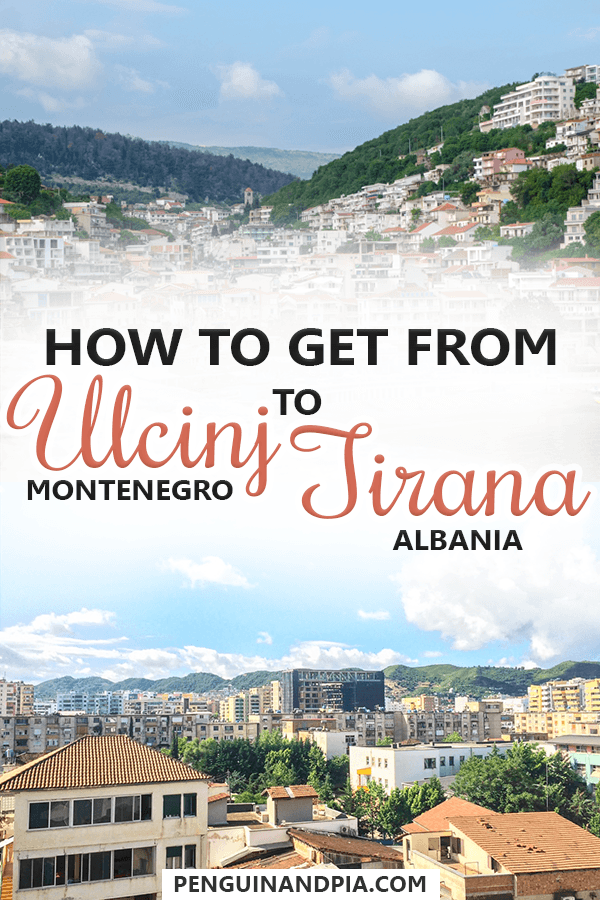