Due to the current global health situation with COVID-19, we’d suggest not travelling right now. Furthermore, many cities and attractions will not be operating as advertised on our website. Please stay up to date using official sources like the WHO. Stay home and stay safe!
Links in this article may earn us a little money if you book/ order stuff. More here.
Last Updated on March 21, 2020

Here’s How to Find a Multi-City Flight to Europe.

This is the Ultimate List. We had enough of those outdated lists from 2015 so we decided to do the research on our own. Turns out, the classic “Iceland Stopover” from Icelandair and WOWair aren’t the only stopovers available in Europe. In this guide, we’ll cover stopover programs that let you land in Europe only. In the future, we’re working on a comprehensive guide to stopovers around the world.

To begin, it’s probably wise to briefly describe what a “stopover” is.

In air travel, a stopover is simply a term to describe when a passenger stops in a city while travelling between two places. This means that the passenger leaves the airport, their stay is typically longer than a few hours, and they hold a ticket to continue their journey.

A stopover is different from a layover in the sense that a layover is typically shorter in duration, and the passenger (usually) doesn’t leave the airport – they simply change planes and continue travelling. That being said, let’s get booking flights!

Probably most famously known – because they were among the first to offer a stopover – is Icelandair. Having travelled with Icelandair in 2015 (and again in 2017) en route to begin a classic Euro Trip, it was SUPER easy to make Iceland the first stop on that trip.

For Icelandair, you can simply book on their website. They allow the stopover booking for up to 7 nights – and this is possible from 34 North American destinations to 37 European destinations. The options are basically endless. You can visit their website here to learn about how you can connect through Iceland. That way, you can hop on the famous Golden Circle Tour or eat their famed “fermented shark”. True story – for another time.

(Update March 2019: WOWair collapsed due to financial strain. This stopover is not longer available).

Looking to capitalize on the success of Icelandair and the boom in tourism to Iceland in general, WOWair became the newcomer to the scene. Eric travelled with WOWair on a total of 8 flights in the first half of 2017 alone as he headed back and forth to Europe to visit Lisa. While he didn’t leave the airport for most of them (having been in-transit and not touring through Iceland) connecting in Iceland with WOWair made the trips incredibly cheaper to go back and forth.

We will address the “elephant on the plane” – some travellers love WOWair, while some absolutely despise WOWair. Personally, we love them. Yes, they are a budget carrier – you pay for extras and flights are often delayed (usually up to 45 minutes), but if you’re not in a rush, you travel light, and have a tolerant mindset about life, you’ll be more than fine.

The basics of their stopover are that you can book a flight to Europe from North America, choose “stopover” as a booking option, and simply delay the connecting flight in Iceland for however many days you want. WOWair makes it easy to see Iceland, too. You can book your airport shuttle bus transfer to Reykjavik and any tours/excursions while on the plane. Pretty slick. You can visit their website to learn more about how their stopover works.

Read Next – Which Nordic Capital is Best to Visit?

We did the TAP stopover in June of 2017. What a rush! We’ve written a great guide on everything we did and everything you need to know if you’re visiting Lisbon for only 6 hours! For now, we want to tell everyone about the stopover opportunity. We spent 6 hours in Lisbon and had plenty of time to see the sights and get back to the plane later that evening.

To do this, simply book on their website. You can book for up to 5 nights, allowing you plenty of time to explore Lisbon or Porto. They even have hotel deals, perks on things to do, and a whole app you can download that helps set all of this up. For TAP, you can visit them here if you’re interested in checking out Portugal for a few hours or longer!

There’s also another KLM page – and this offer is a little specific but a Europe stopover is a Europe stopover. Apparently, travellers can get a stopover in Amsterdam if they book returning flights originating from – ready for this – Chile! Yeah, that’s what we thought, too.

So, if you’re travelling from Chile to Europe – stop in Amsterdam to see two cities for the price of one! This booking option is available on all class fares which makes it easy to do – but again, you have to be flying from Chile. You can read more about this awesome and very specific deal on their website.

The home of Guinness, the famous Temple Bar, and of course, Jameson Irish Whiskey – Dublin is a lively city that’s a must-see for any European traveller. Eric has visited a few times and was there in 2015 for St. Patrick’s Day. Even though it was only for a weekend – it was one for the ages. Here’s a whole post on things to do in Dublin!

If you want to enjoy Dublin in all its glory, then you can contact AerLingus for more information. This stopover isn’t heavily publicized, so definitely see what the deal is all about and let us know!

Taking advantage of seeing London is well worth your time. It’s London, after all. Virgin apparently makes it easy – just book “multi-city” when you book directly through their website. They even provide you with a promo code for booking the “Heathrow Express” – a dedicated train from Heathrow to Paddington Station that can get you back and forth in as little as 15 minutes.

While we haven’t tried this stopover personally, it seems useful for travellers through Europe so we decided to put it on the list. You can read more about this on the Virgin Atlantic website.

Having been to Helsinki (Eric visited on his 26th birthday – good times) we can tell you that it’s a beautiful city with a lot of Finnish charm. With FinnAir, simply book your return trip online and indicate which leg of the trip you want your stopover on – flying to or from your final destination.

You choose your stopover time – from 5 hours up to 5 days, and you can even book excursions through the airline. If you’re interested in learning more, you can visit their website here. Also, we’ve created a one day in Helsinki itinerary for those of you wanting to explore the city on your own!

Buried away in their Terms and Conditions, you’ll find a clause about “Break in Journey” (Stopover). Apparently, you can book a stopover if you phone in the booking. Here’s the link to the FAQ that directs you to the appropriate Contact Centre.

If anyone has success with this one – we’re looking forward to hearing about the experience. We love Poland – Krakow and Warsaw are both incredible cities that are drastically different from one another and need to be explored if you’re keen on experiencing all that Europe has to offer.

This one is a little different since the flight is towards North America and not originating from there. Turkish Airlines have an Istanbul stopover – if you’re flying round-trip from Pakistan to either the United States, United Kingdom, Ireland, or one of the Schengen countries.

Simply book online and make sure you’re aware of the stopover length you’re booking. You can read more about the stopover on their official page. This scheme allows travellers free accommodation, among other perks.

All international travellers with a layover of 6-24 hours connecting with Turkish Airlines in Istanbul can take advantage of TourIstanbul – a dedicated free tour service for connecting travellers to see Istanbul on a guided tour.

Simply cross through Passport Control and sign up in the terminal! Be mindful of your arrival times to get on a tour in time. Also note – if you do this, depending on the passport you hold, you’ll need an eVisa or a full tourist visa to enter Turkey!

There you have it! All the European stopovers we could find! It’s clear that some countries are leveraging this idea more than others to attract tourists and their money. That said, it’s a great time to be a consumer. As more and more options become available, travellers have more and more choices that add to their travel experiences and are cheaper in the long run.

Speaking of cheaper, if you’re interested, you can read our tips on booking cheap flights. Are there more stopover locations in Europe we didn’t mention? Please let us know! 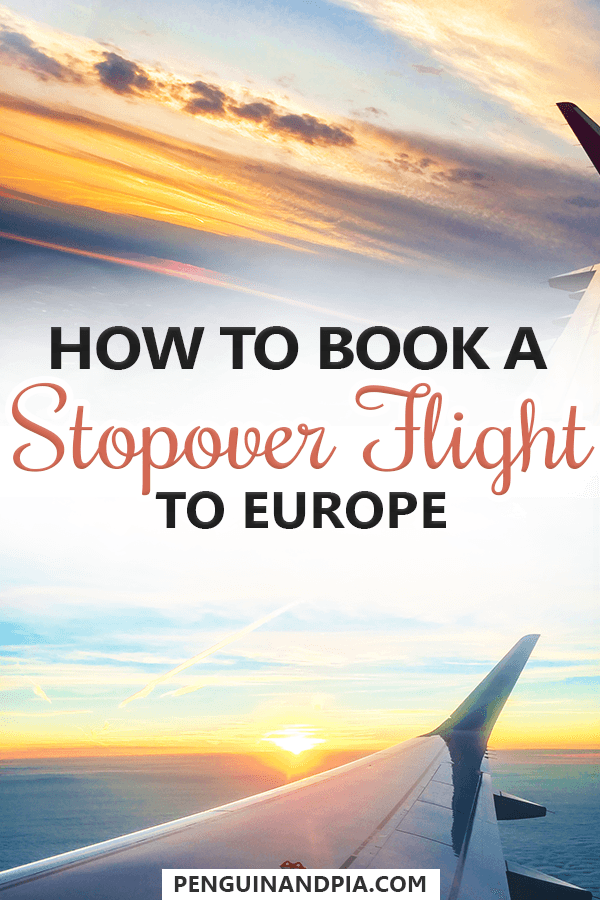