There Are Lots Of Great Things To Do In Mainz, Germany!

Have you ever been to Mainz, Germany? Ever heard of it before? If you aren’t German, the chances are pretty low that you’ve ventured into this small city. That said, there are some awesome facts about Mainz – like the massive Mainz cathedral dominating the old town skyline! If you are travelling to Germany for the first time, Mainz just might make your “to see” list.

We wandered through Mainz while on a shorter trip of the surrounding area that included the northwest of Bavaria. If you are exploring the area, you might be looking for things to do in Wiesbaden, things to see in Aschaffenburg, and/or things to do in Frankfurt. We loved all these places – and we plan on covering Frankfurt soon!

Now, we didn’t have a TON of time in Mainz – we only had a few hours. But we made the most of our time to check out a few points of interest, photograph the pretty sights, and get a general sense of the city. It would have been handy if we had a Mainz tourist map – but we just went about our wander using Google Maps on our phone. So, let’s chat about what there is to see and do in Mainz, Germany!

If you are looking for other Germany posts – along with helpful German phrases to know – we’ve got a whole Germany Series going:

Things to Consider When Visiting Mainz

Mainz isn’t a tiny village, but it is also not a major city like the massive port city Hamburg. It’s a smaller city with a population of just over 200,000 people. Mainz is located where the river Main and the Rhine – the two famous German rivers – meet. This significance has made Mainz a hub for trade and industry for (not kidding) two millennia when the Romans settled it.

You’ll find loads of ways to get to Mainz, public transportation once you are in Mainz, and plenty of places to stay the night if you’d like to spend a bit more time in the city than we did! We’ll briefly cover some of these topics below.

How to Get to Mainz

It’s actually pretty easy to get to Mainz. If you are driving, take any of the A60, A63, A643 or A66. We got to Mainz on the S-train from Wiesbaden, but you could also get to Mainz from Frankfurt. If you’re travelling from Frankfurt or another nearby city to Mainz, use this website to plan your journey by train. If you are coming from a place farther away, the train is usually also a good option, but instead of using the local transportation website use the DB Website to plan your journey.

Getting Around in Mainz

Once you’re in Mainz, the city is actually pretty walkable. The centre from the train station to the river is flat with one hill where we explored an old tower (see below). If you aren’t keen to walk about, there is an extensive bus system that goes all over the city. There is also a street train (tram) system that we saw shuttling by. Here is a link to the main transit website Mainzer Mobilität. It’s in German, but it might be helpful.

Where to Stay in Mainz

If you are considering spending a night or two in Mainz then you have plenty of places to choose from. Mainz has a great mix of modern and beautiful old hotels in the city centre, along with rented apartments for a longer stay in the city. You can check here for hotels/accommodation in Mainz.

If you are set on visiting and sleeping there, you might want to stay right in the centre – in which case you can stay in the building on the photo! This is The Osteiner Hof at Schillerplatz square. In there you can find beautiful apartments you can rent for a stay in Mainz. From there it is just a 5-7 minute walk to the Cathedral and the Old town!

Top Things To Do In Mainz, Germany

Okay, now that we have chatted about places to stay and how to get around, let’s cover exactly what there is to do and see! Again, we only wandered around for a few hours to get a sense of the city so we didn’t have the chance to dive into anything too deeply. It was more of a scouting trip between Wiesbaden and Aschaffenburg and we plan to go back to the area soon! Of course we’ll update this article accordingly.

One of the first things you should do is head right for the old town. German old towns are known for their colourful buildings and stunning architecture – and Mainz did NOT disappoint. The buildings on the main square (shown above and below) are really pretty. There are restaurants and cafes lining the bottoms for that classic “coffee in the square”. 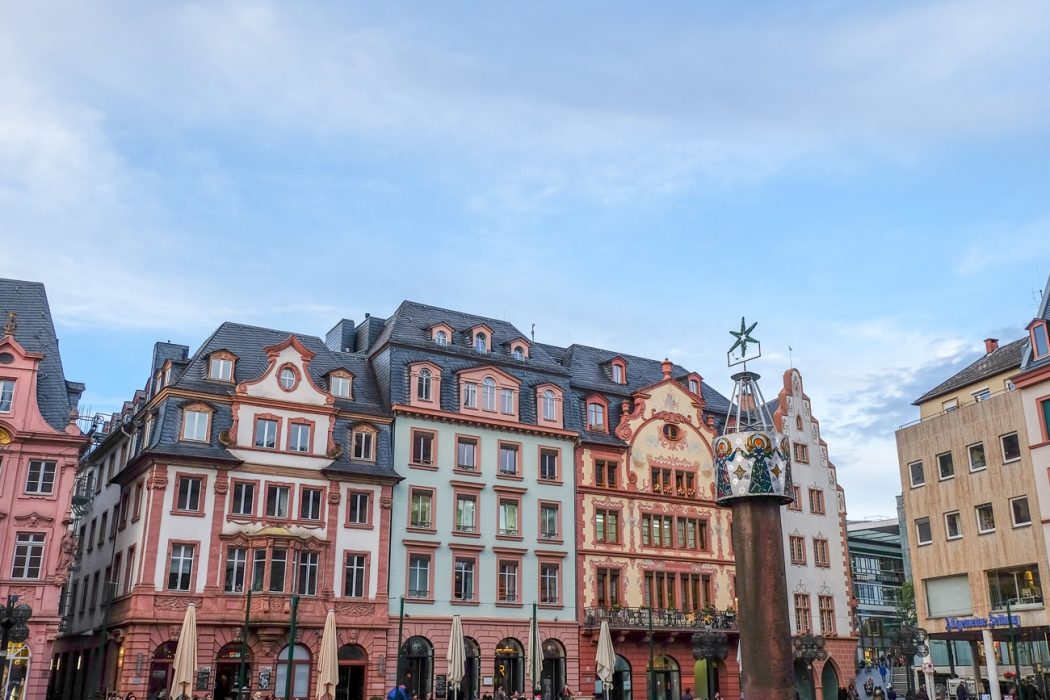 There are also lots of side streets that have other shops and attractions (like the cathedral and museum listed below). One thing that we are super sad about is the fact the Mainz has a gorgeous Christmas market in the old town and when we went they were JUST setting it up. So, we might be back in the next few weeks – or maybe next year. There are just so many German Christmas markets to choose from!

Originally founded in the 10th century, the Mainz Cathedral is a stunning cathedral that sits proudly in the old town. Even for German standards, the building is gorgeous. Over the centuries, the structure has been added to – which is why you might notice a variety of different architectural styles represented. In fact, the stone was toned red to match the surrounding buildings as recently as two centuries ago.

The cathedral was heavily damaged during World War II bombing in 1942 but has since been restored. We didn’t get a chance to go inside but we’ve seen photos and it’s lovely. Frankly, we were lucky enough to see it from the outside but you really can’t miss it!

See a Show at the Staatstheater

While you are wandering downtown, you might notice a red monolithic looking building standing with glass on top. This is the main theatre in Mainz! The Staatstheater, as it’s called in German, was opened in 1833 and actually houses two theatres that are connected inside. If you want to see a performance, you can check out the official website here.

If you are interested in learning about the history of print and literature, why not stop by the Gutenberg Museum? This museum was founded in the early 19000 as a way to pay tribute to Johannes Gutenberg, the inventor of the printing press that modernized printing in Europe! The museum actually has two 15th century “Gutenberg Bibles” – which were among the first books ever printed in modern history! If you want to plan a visit, check out the official website for the Gutenburg Museum here.

Admire the Church of St Stephan

We were walking along up the hill from old town when we saw a colourful tower in the distance. Intrigued, we wandered down a beautiful side street and this is what we found – the Church of St Stephan. This Baroque-style building actually replaced the Romantic-era styled one in 13th and 14th century.

The church features stain glass windows designed by the master artist Marc Chagall. If you want to attend a service or just want to look around, you can learn all about the times and opening hours at the official website in English.

Find the Many Fountains

If you walk around enough, you will definitely notice this too: there are loads of fountains around Mainz, and they are all really cool or pretty. The one above is right across from the Cathedral in the old town main square. It is called the Marktbrunnen, and is beautifully designed.

Located in a small square/parking lot outside a school called Ballplatz, this is called Drei-Mädchen-Brunnen – meaning literally “Three Girls Fountain” in English. Fittingly, school was just out of session and so the area was filled with kids and their backpacks heading home from school.

Finally, there is the Fastnachtsbrunnen. Completed in 1967, this fountain, located in Schillerplatz, has over 200 bronze sculptures that are meant to celebrate the joy in life and the spirit of carnival in Mainz. There are probably many more fountains around so if you go and find more please tag us any way you can because we want to hear about it!

Given that Mainz was settled by the Romans 2000 years ago, we thought there would be a deeper connection to that part of the city’s history. So, we set out to see the old ruins. We wanted to see the old wall/gate called the Römertor.

Turns out, the ruins are in a residential complex which clearly states that it’s private. However, there is a tourism sign with a huge explanation and diagram of what the old wall/gate at that location looked like. So, we were confused and underwhelmed – but still kinda cool to see that they didn’t just cover this over completely – which they easily could have done!

If you exit the residential compound near the Novotel Mainz, you will find the Alexanderturm – which is an old tower that is now on the grounds to a restaurant, Kupferberg Terrassen! We didn’t eat there but it looked great, has medieval cellars, and the reviews are really good. You can check them out if you need food up on the hill or you book the Novotel!

And there you have it – some great things to do and see in Mainz, Germany! Again, this is just a sample. There are so many more churches, museums, and beautiful green spaces – include all along the river – which we just didn’t get a chance to see. So, consider this your Mainz teaser trailer that we will add to in the future! If you stop in Mainz, let us know what you think!